The Feliz Filadelfia Angels 18-Under girls Softball team played round 2 of the playoffs just 24 hours after advancing in walk-off fashion.

A very tough Somerton Yellow Jacket team came to our fields for round 2 of the playoffs in hopes of making it to the Championship game with a win. The Yellow Jackets started early and took a 3-0 lead in the 1st inning. Feliz Filadelfia answered back in the 2nd inning, tying the game at 3. This game had the making of being great. Both teams were playing good defense and hitting the ball well.

The Somerton Yellow Jackets took a 8-7 lead into the 6th inning but Feliz Filadelfia answered back in the bottom half of the 6th inning scoring 5 runs with big hits from 3rd baseman M. López and Catcher M. Aguilar, both of whom hit deep shots for RBI Doubles. Fans from both sides of the field were extremely excited.

Feliz Filadelfia had a 12-7 lead in the 7th inning and needed just 3 outs to advance to the Big Game but the Yellow Jackets did not go down without a fight. They came out swinging in the last inning and cut the lead down to 12-10 with 2 outs and the bases loaded. Fans from both teams were now extremely excited and the park was jumping!

The next Yellow Jacket up was 3 for 3 at the plate tonight with the bases loaded. But as we ran out of daylight, the umpires called timeout and decided to call the game and suggested we continue on the next day. But both teams and their coaches were not happy about this decision and we collectively agreed to finish the game this evening at our bigger (and lighted) field.

Off we went to the larger field with lights. Parents and both teams grabbed everything from one field to the other and you knew that something special was going to happen on this night for one of the teams. Everyone was determined to make it to the Championship game. Angels coach Anthony Aponte adjusted the field after measuring. You could feel the anxiety and excitement on both sides. The Feliz Filadelfia Angels were 1 out away and the Yellow Jackets only needed one big hit to tie the game.

After the 20 min delay, the game resumed with pitcher A. Sannicandro facing loaded bases and a hot hitter (3/3) in front of her. But A. Sannicandro won the battle, striking the batter out. But amid all the excitement, the Angles catcher dropped the 3rd strike and forgot to throw to 1st, so a run came in. We now have a 1 run game.

Fans were now yelling in excitement for the Yellow Jackets who were 1 walk or hit from tying the game. Coach Anthony is yelling at his girls to focus and get the final out. The next batter hits a ground ball to 3rd base M.Lopez who bobbled the ball but somehow found a way to stretch and touch the 3rd base bag for the final out. And that was the game !!

So the Feliz Filadelfia Angels hung on and advanced to the Championship Game with a 12-11 record!!

Great job from both teams in what turned out to be the second nail biter in 24 hours at Hammond Fields. Feliz Filadelfia advances to the Championship game and will Play their rival team from Rhawnhurst. 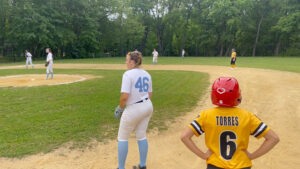 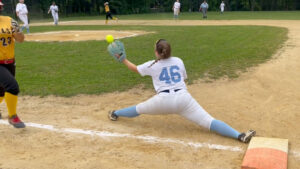 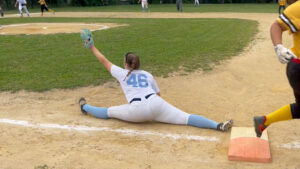 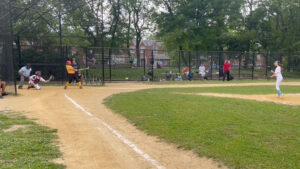 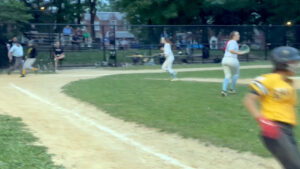